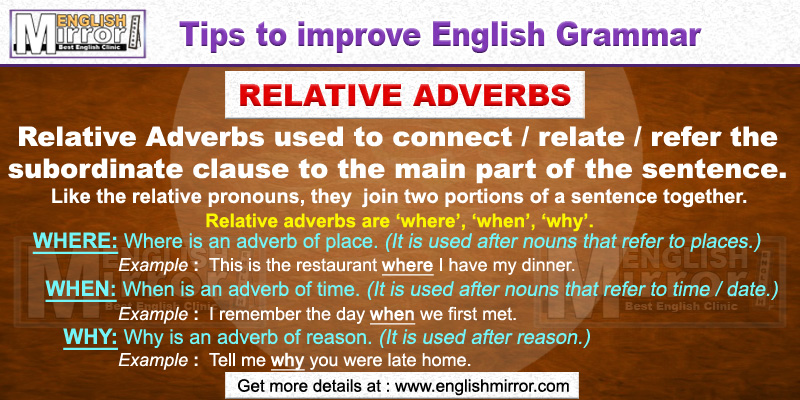 What are Relative Adverbs?

"Relative Adverbs used to connect the subordinate clause to the main part of the sentence. Like the relative pronouns, they are joining words."

"Where, when, and why are relative adverbs"

» Where : is an adverb of place. (It is used after nouns that refer to places.)

• I know the house where he lives.

» When : is an adverb of time. (It is used after nouns that refer to times and dates.)

• I remember the day when we first met.

• Tell me why you were late home.

Uses of Relative Adverb 'Where':

'Where' is an adverb of place, so it is used to refer to location. The place can be any kind of location, such as a country, city, geographical region, house, or shop. It replaces the preposition plus relative pronoun 'in which' or 'at which'.

• This is the restaurant where I have my dinner.

Here the adverb 'where' is used to connect the subordinate clause / have my dinner to the main part of the sentence. The restaurant is the antecedent of the relative adverb 'where'. The antecedent is clearly stated. ‘Where’ can be replaced by 'at which' (relative pronoun).

• This is the restaurant at which I have my dinner.

But sometimes, the antecedent is only understood and not openly stated.

• This is where (=the place at which) I have my dinner.

Uses of Relative Adverb 'When':

'When' is an adverb of time, and so it is used to introduce a relative clause that relates to time. It replaces a preposition plus relative pronoun, in this case the words 'in which', 'at which', or 'on which', which are reserved for more formal contexts.

• (b) I cannot forget the years when (=during which) I was in school.

In sentence (a) we can use 'that' in place of 'when'. ‘When’ can also be dropped altogether. eg.

But we cannot replace or omit when in sentence (b) & (c).

Uses of Relative Adverb 'Why':

'Why' is an adverb of reason. The relative clause is thus relating to why something happened. It replaces 'for which'.

• The reason why this man comes here is not clear.

Here 'why' can be replaced with for which. It can also be omitted altogether. eg.

• There is no reason why (= for which) we should meet him.