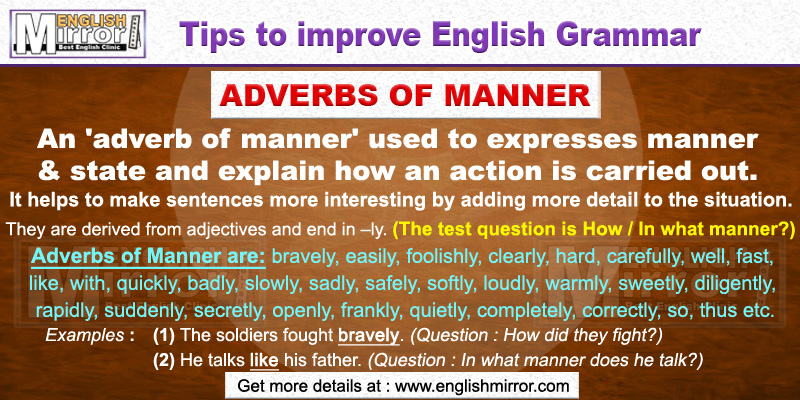 What is Adverbs of Manner?

"An 'adverb of manner' explain how an action is carried out and expresses manner & state."

Adverbs of manner helps to make sentences more interesting by adding more detail to the situation.

Adverb of manner and state includes all the adverbs which are derived from adjectives and end in –ly. (The test question is How / In what manner?).

• He talks like his boss. (Question : In what manner does he talk?)

• Priya talked sweetly. (Question : How did she talk?)

• Position of Adverbs of Manner (Where to put them in sentence):

1. At the beginning of the sentence,

2. In the middle of the sentence,

3. At the end of the sentence.

» At the beginning of the sentence
» In the middle of the sentence
» At the end of the sentence
bravely, easily, foolishly, clearly, hard, carefully, well, fast, soundly, like, with, quickly, badly, slowly, sadly, safely, softly, loudly, warmly, sweetly, diligently, rapidly, suddenly, secretly, openly, frankly, quietly, completely, correctly, so, thus etc.

• We make most of them simply by adding -ly to their corresponding adjective.
• Here is an alphabetical list of common single-word adverbs of manner.