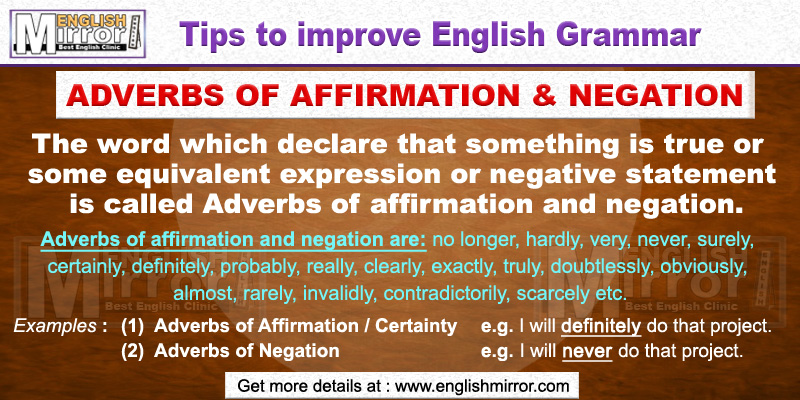 What is Adverbs of affirmation and negation?

"The word which declare that something is true or some equivalent expression or negative statement, judgment, doctrine or a logical proposition is called Adverbs of affirmation and negation."

» Adverb of Affirmation : I will definitely do that project.

In the sentence ‘definitely’ affirms the listener that the speaker is going to do the task which is being talked about. ‘Definitely’ is therefore an Adverb of Affirmation.

» Adverb of Negation : I will never do that project.

In the sentence ‘never’ negates the sentence by telling that the speaker is not going to do the particular task. ‘Never’ is therefore an Adverb of Negation.

If there is an auxiliary verb in sentence, the adverb of certainty goes between the auxiliary and the main verb.

Sometimes these adverbs of certainty can be placed at the beginning of the sentence. like: certainly, probably, undoubtedly.

When the adverb of certainty 'surely' is placed at the beginning of the sentence, it means the speaker thinks something is true, but is looking for confirmation.