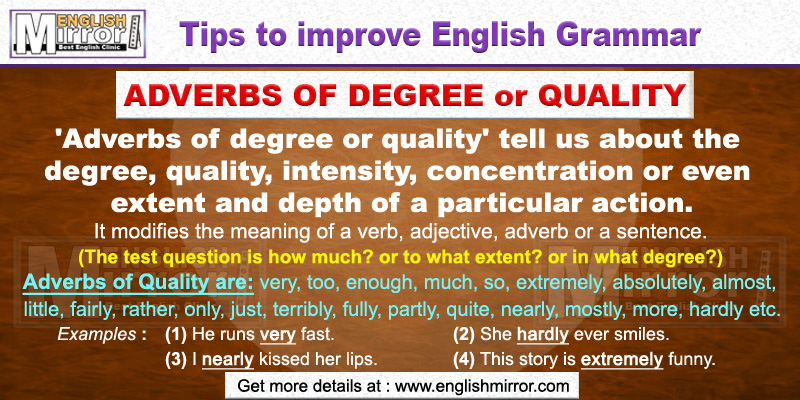 What is Adverbs of Quality?

"'Adverbs of degree or quality' tell us about the degree, quality, intensity, concentration or even extent and depth of a particular action."

It modifies the meaning of a verb, adjective, adverb or a sentence.

An adverb of degree is used to modify any part of speech except a noun or pronoun.
(The test question is how much? or to what extent? or in what degree?)

• I don't have enough red barries. (Question : How much?)

• He is running very fast. (Question : To what extent?)

• Rohan works too hard. (Question : In what degree?)

• Adverbs of degree modifies the meaning of a verb, adjective, adverb or a sentence:

1. An adverb modifies a verb.

2. An adverb modifies an adjective.

3. An adverb modifies another adverb.

4. An adverb modifies the whole sentence.

Enough can be used as both an adverb and as a determiner. Enough as an adverb meaning 'to the necessary degree' used after the adjective or adverb that it is modifying, and not before it as other adverbs do. It can be used both in positive and negative sentences.

'Too' is always an adverb, but it has two distinct meanings, each with its own usage patterns. 'Too' as an adverb meaning "also" goes at the end of the phrase it modifies.

'Very' is used before an adverb or adjective to make it stronger.

Some common adverbs are used in the same way as 'very' to heighten the degree of adjectives and adverbs.
very, too, enough, much, so, extremely, absolutely, almost, little, fairly, wholly, rather, only, just, terribly, fully, partly, quite, somewhat, half, nearly, mostly, more, hardly etc.
List of Commonly Used Adverbs of Degree:
English Grammar : Adverbs
Related Topics :