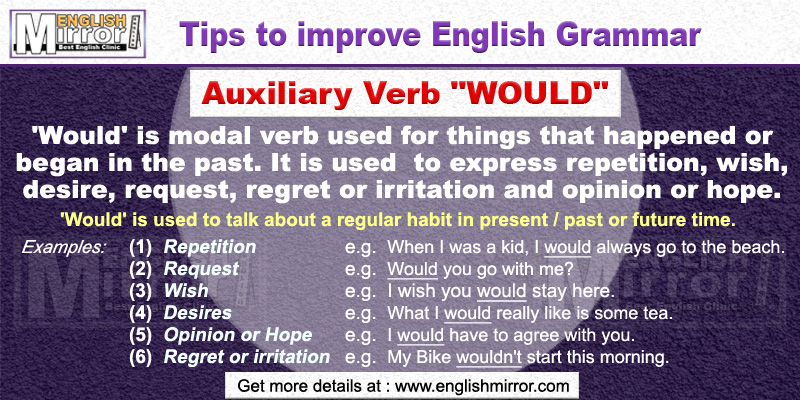 Uses of Auxiliary Verb "WOULD"

'Would' is modal verb used for things that happened or began in the past. It is used to express repetition, wish, desire, request, regret or irritation and opinion or hope.

'Would' is past equivalent form of will. It is used to talk about a regular habit in present/past or future time.

It is used in :
• Simple present /past tense (would)
• Future tense (would)
• Present continuous tense (would be)
• To mean determination in future.
Example:
• I would complain to the principle tomorrow.
• To express commands/give instructions.
Example:
• All the students would attend the morning prayer in time.
Past of "will":
We use 'would' when a sentence expresses a future possibility, expectation, intention, or inevitability that began in the past.
Repetition:
'Would' is used to express activities of the past in repetitive manner.
Request:
'Would' is used to make a polite request adding a level of politeness to the question.
Wish:
'Would' is used to make a wish adding a level of politeness.
Desires:
We use 'would' with the main verb like to express or inquire about a person’s desire to do something.
Opinion or Hope:
We use 'would' to express opinion or hope.
Regret or irritation:
'Would' used to show that somebody or something was not willing or refused to do something.
Conditional:
We use 'would' to talk about things that cannot or are unlikely to happen.
Types of Auxiliary Verbs