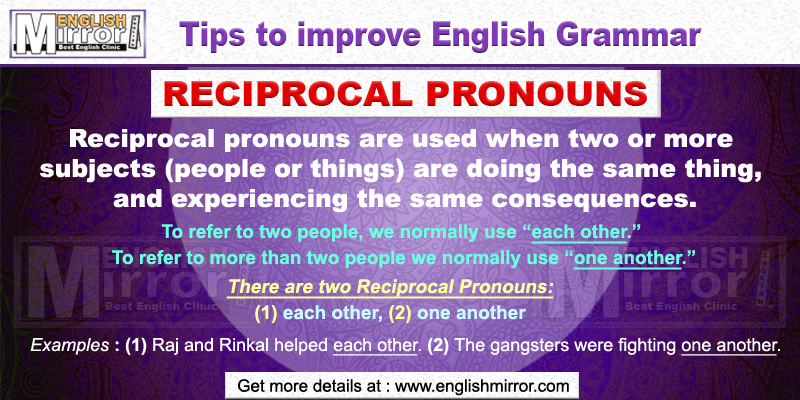 What Are Reciprocal Pronouns?

"Reciprocal pronouns are used when two or more subjects (people or things) are doing the same thing, and experiencing the same consequences."

The term “reciprocate” means to give in return. A reciprocal pronoun is a pronoun used to identify an action or feeling that is reciprocated. For this reason, it always refers to more than one person. Reciprocal pronouns used to indicate that two or more people are carrying out or have carried out an action of some type, with both receiving the benefits or consequences of that action simultaneously.

We use reciprocal pronouns in following situations:
• there must be two or more people, things or groups involved, and
• they must be doing the same thing.

The reciprocal pronouns are:

'Each other' is used when there is need to show two people performing same action.

'One another' is used when there is need to show more than two people performing same action.
Uses of Reciprocal Pronouns.
Examples with 'each other':
Examples with 'one another':
English Grammar : Pronoun
Related Topics :